I've been using a lot of brown paint lately...mostly burnt sienna (although I will warn you - it could be raw sienna.  I'm having one of those moments where I just can't remember which is which!)

I just shipped out this adorable portrait based on a 1950's photo of a couple on the beach.  The client commissioned it just before the birth of her first child, who is named for his Great Grandpa in the photo. 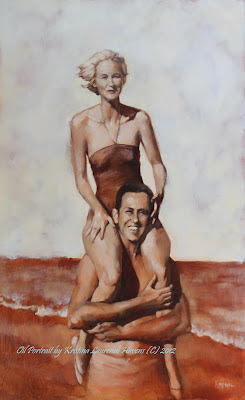 The original photo was in black and white, and showed some age.  I decided to stick with a warm palette, and painted this on a prepared birch panel.  In many places, there is just a stain of brown paint, allowing the wood grain to show through.

During our figure drawing group last night I used just burnt sienna and thinner as I blocked in this long lounging pose on a 12" x 24" canvas. 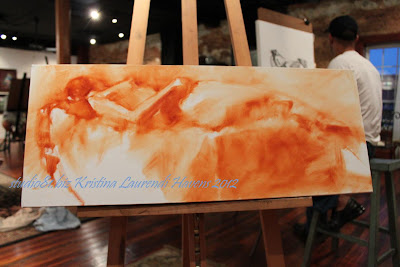 As I tell my students - keep it soft, work on the whole image at once.  At first I had the figure about an inch lower, but I wanted more of the drapery (which is patterned and will be painted in eventually) and less negative space above her body.  So I raised the entire figure. 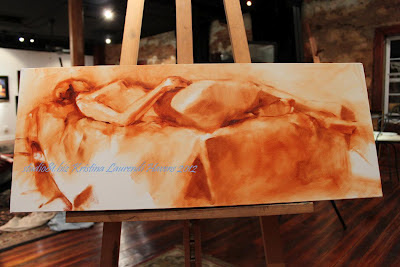 I used a little bit of dark brown mixed into the sepia to define more of the folds and cast shadows on her body. 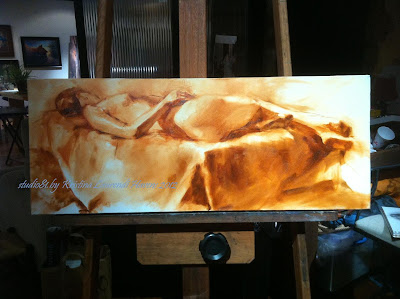 I'll have to take a better photo, but this does show the value range I locked in towards the end of our time with the model (a total of about 80 minutes from the live model)  Towards the end, maybe about 10 minutes left, I took a few steps back from my work and realized her head was too small, and painted it in again.

The model was gracious enough to allow a reference photo, so I am looking forward to finishing up this painting.
Posted by Krystyna81 at 4:28 PM

Your work is fantastic first of all- i had to say that! and second- what medium do you use most to paint with? I noticed you mentioned oil...and watercolor? But i could not tell the difference on a few of yours!!

Both of these paintings are in Oil, but I do work in watercolor as well.