Someone who shall remain nameless got me sucked into Game of Thrones.  So for the last three months I chain watched episodes and caught up to season 4.  I was one of - apparently - 8 million people who turned in on Sunday night to start Season 5.

From the very first scene in the series, I was enamored of the lighting and the costumes.  I am horrible with names, my attention span isn't what it used to be, and darn it!  I have to stay caught up in my Words with Friends Games!  But all the world stops when I watch GoT.

So far I have done three portraits, and I'll share this one first - Maester Luwin from Winterfell, played by Donald Sumpter.

One of the aspects I am working on in my paintings is my tendency to paint very "hot" - too much red and orange in my skin tones (we can debate if that's a good or bad thing later...I just want to try and paint in a cooler palette, experiment with the color)  So I loved the color of Maester Lewin, especially in this scene where he is teaching Bran about Westeros in the episode "The Wolf and the Lion".

I started with very cool, dark, transparent colors to block in the face. 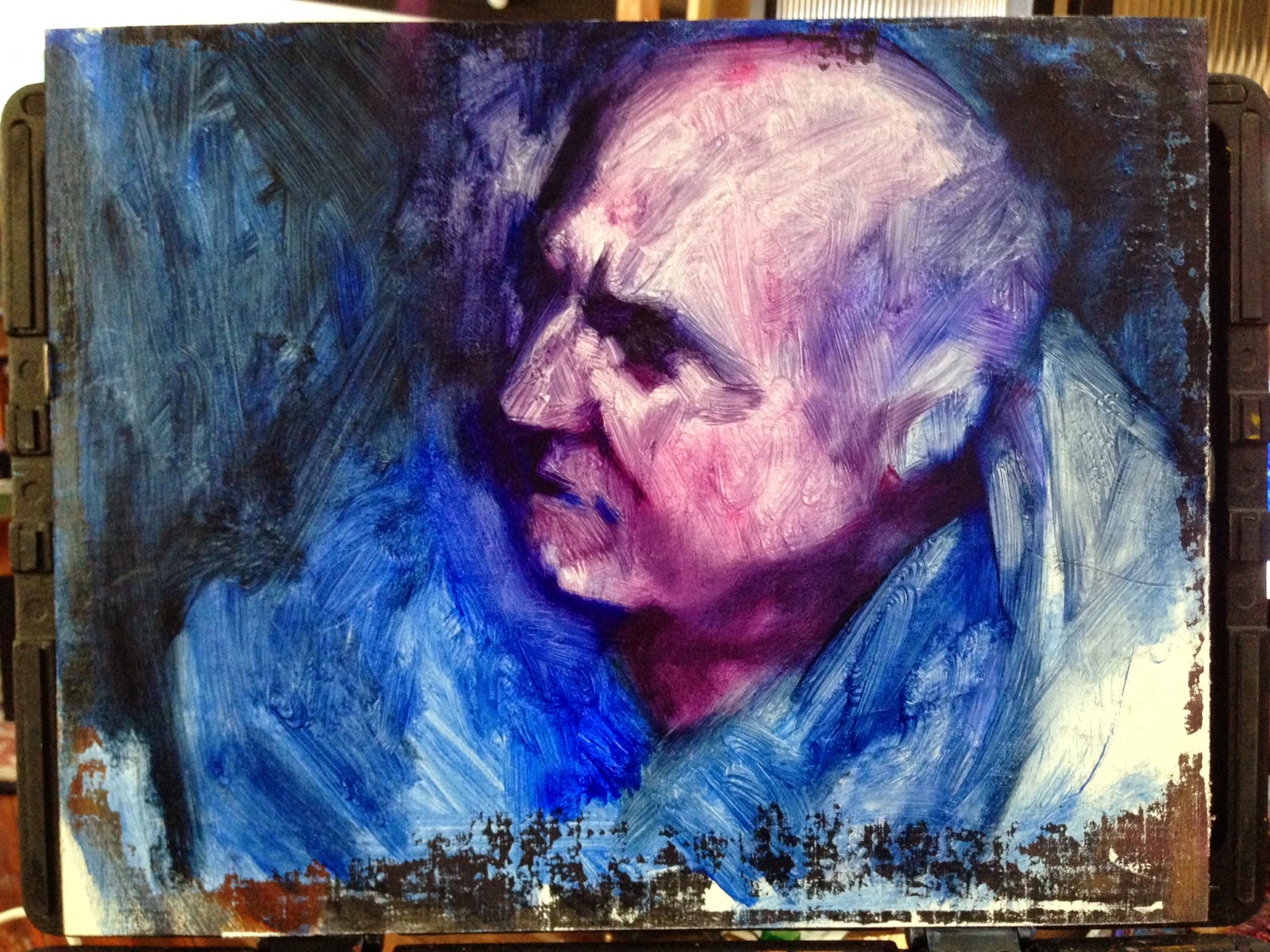 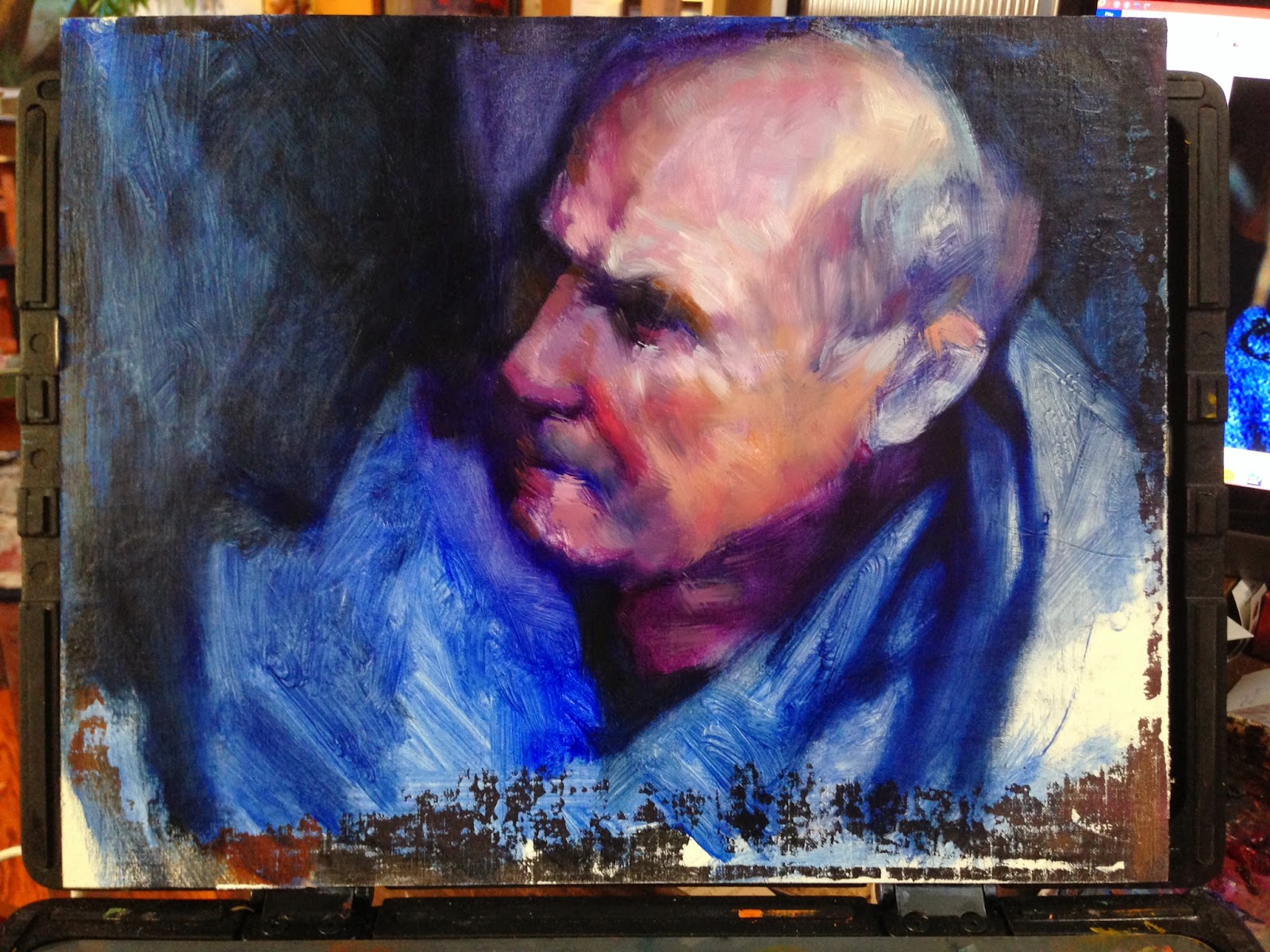 I then started to block in some of the flesh on the face.  I realized - when taking photos - that my camera (ok iphone) tends to make everything look warmer - more red - than in "real life".  So that could be one of my problems - when painting from photographs the reds are too strong.

Anyway, I purposefully only used cool colors on my palette - the "warmest" color was transparent red oxide. 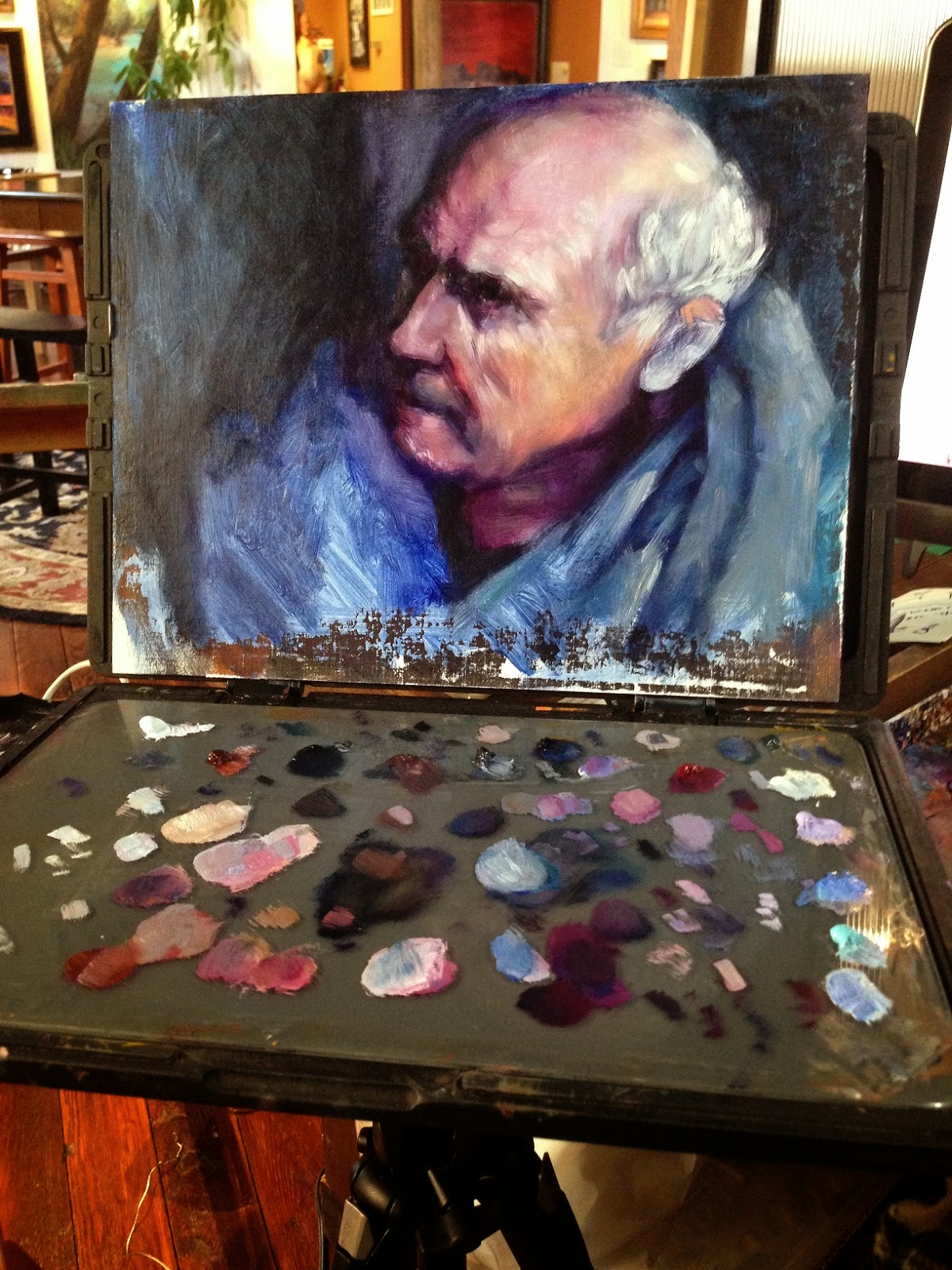 Because the scene was filmed in an outdoor cool light, the flesh had a cool feeling, very icy blue, everywhere except his ear.  That is the only spot I used any cadmium orange and red.  It was a nice contrast to the predominantly cool painting. 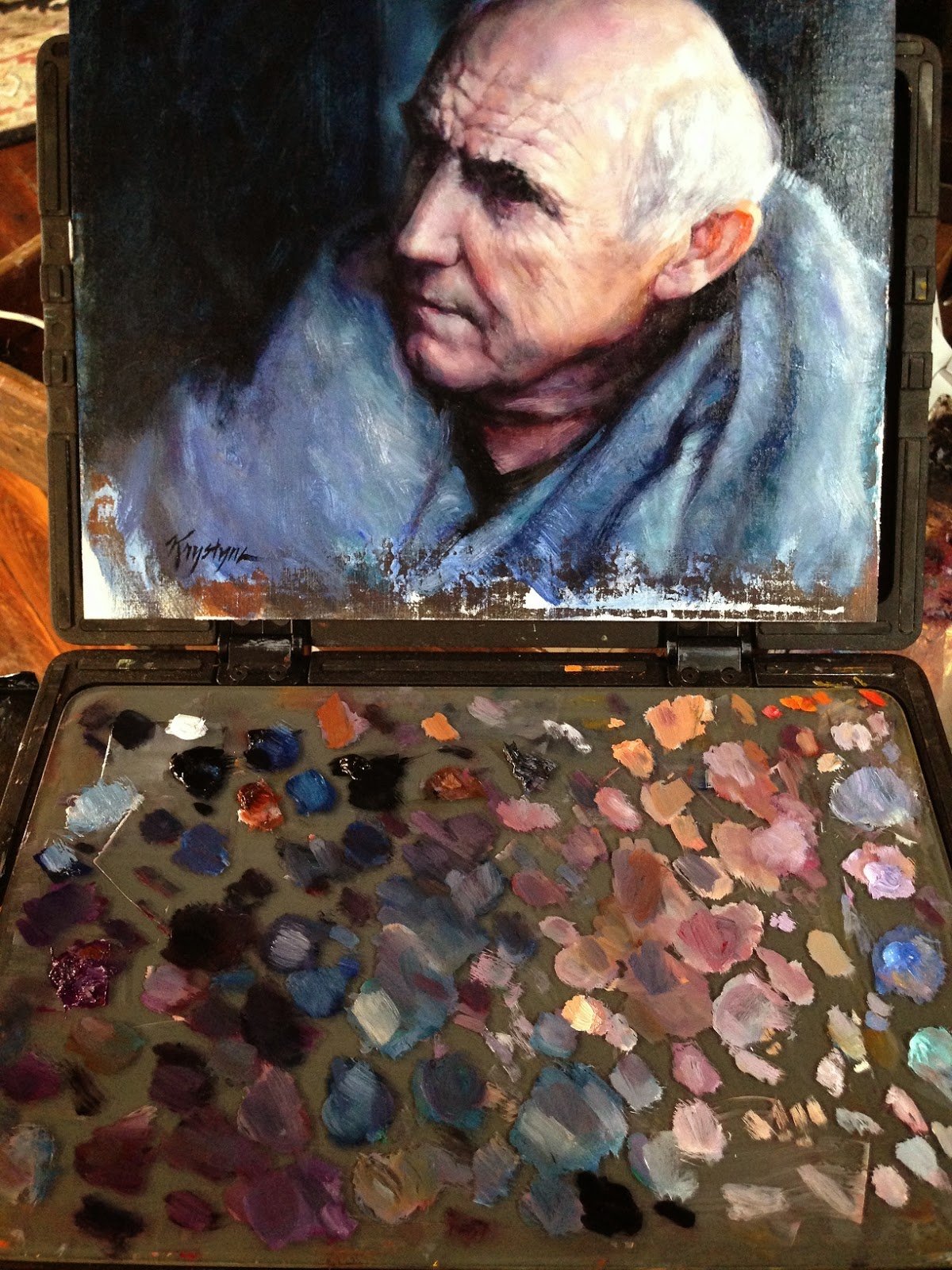 I took great care to try and capture what Mr. Sumpter brought to the role of Maester Luwin - the incredible warmth partnered with deep wisdom.  I have incredible respect for these marvelous actors, and everyone on the Game of Thrones team...they are all artists. 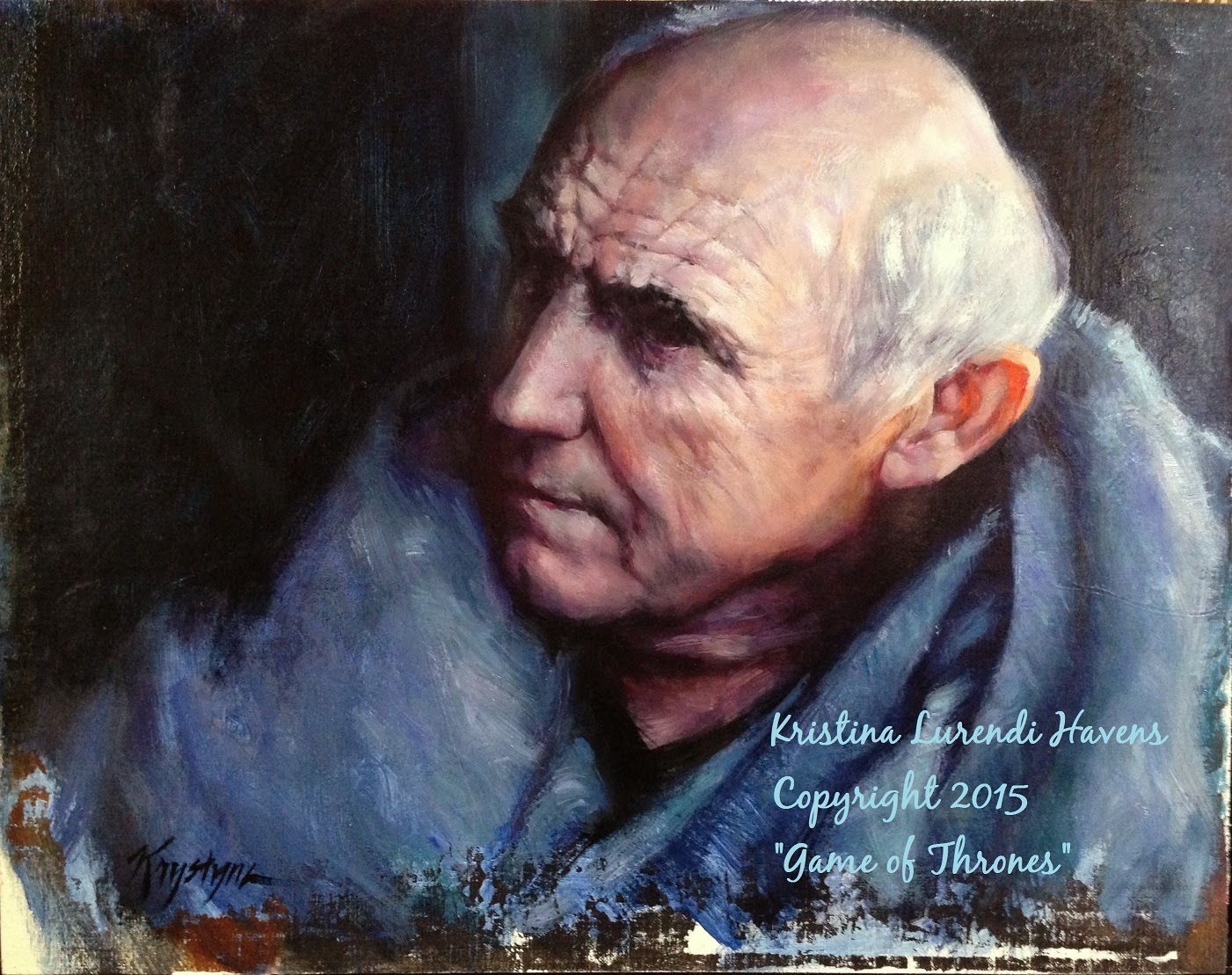 The painting is done on an oil primed linen, that had a previous life as another painting, and was then recovered with oil based primer.  I intentionally leave some texture along the edges, a little peak of the history of the surface.  This portrait is 11" x 14".