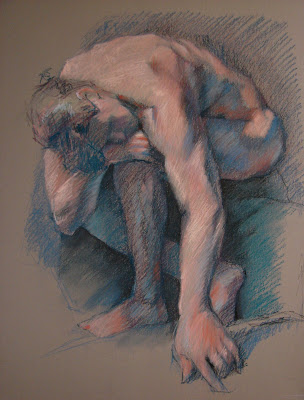 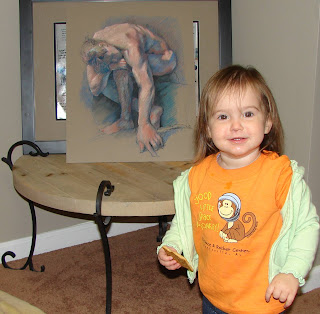 So...here's my little peanut and the drawing!
Posted by Krystyna81 at 9:56 AM

Beautiful drawing. It really gives a sense of pensive peacefulness.

And your daughter is sooooooooooo cute!!!!! Oh my goodness!

Very nice! I love how you work with lights and darks. I haven't worked from a live model in a long while... I miss it, too!

Beautiful piece, yes I do agree, it does look very peaceful

This is a gorgeous drawing!

I don't know who is better to look at, Little Peanut or Mike.... I gave you an award, see my blog when you get a chance.

Powerful Drawing- I love It!!

Great use of the colours too!

This is a beautiful figure drawing. I love the colors. At least your group is considerate of everyone's angle. My classmates are opportunistic, and want the best pose/angle for themselves!

BTW, my 3 y/o daughter does the same thing.