Drawing and Painting the Female

Another wonderful night of drawing this week!  I quick 25 minute drawing in charcoal.  Mostly blocking in bold sections of light and dark. 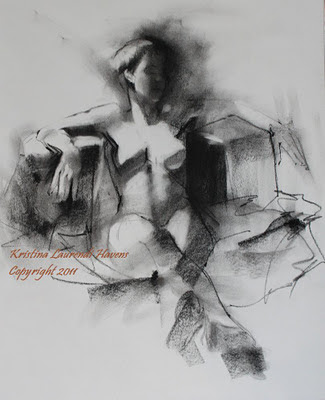 It was challenging to draw from this angle, looking right at her extended legs - the foreshortening was pretty severe.  I also wish I hadn't tried to indicate the features of her face - just used the light and shadow to show which was she was looking.  But I like the bold lines and dramatic values.
Our long pose was really beautiful.  She took a reclining pose accented with a beautiful turquoise robe on top of a deep aubergine blanket. 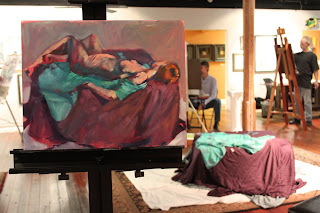 I was so absorbed in my painting that I forgot to take a picture before this stage, which would have been good to show you.  I actually did everything BUT the model when I started.  Her pose was very complex - reclined with lots of angles.  So by blocking in the large ottoman, the drapery, and the background, the model became the last piece of the puzzle - in the correct size and position. 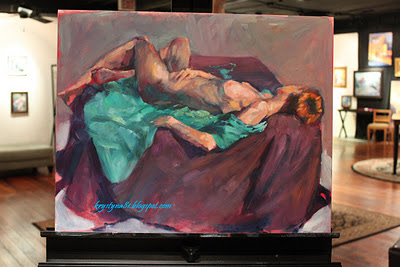 I was painting on a Clayboard designed for watercolor.  I can't remember when I first tried this, but I like using the surface for quick oil studies.  The paint soaks in pretty quickly, so I can apply a couple layers without getting too muddy.  However - it does reach a saturation point pretty fast - you end up just moving paint around rather than applying paint layers on top of one another - if you do too much in the first sitting.
I was lucky to get a reference photo and I look forward to finishing up this painting.
Another beautiful drawing from that night by my friend Shane... 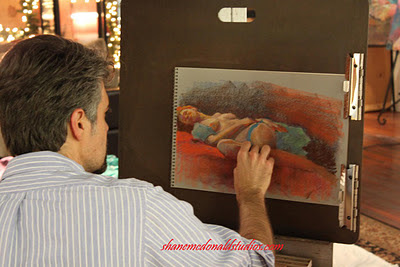 A lovely pose from multiple vantage points!
Posted by Krystyna81 at 11:25 AM 2 comments:

Charcoal Drawings of the Male Model 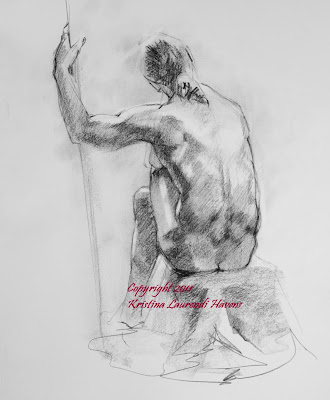 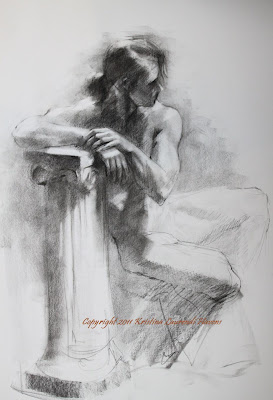 A couple years ago I was flipping through the TV channels and happened upon an interview of Katharine Hepburn at Dick Cavett.  I watched, enamored, for at least 30 minutes (I'm not really sure how long the interview actually was).  But, like Mr. Cavett, I think I fell in love with her about 10 times during the interview. 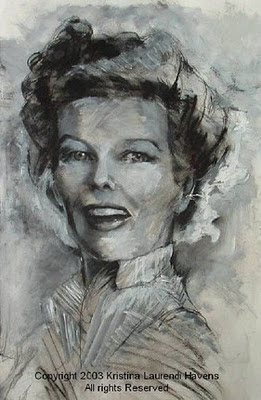 (I had painted this picture years before, based on a photo that was used in her Obituary in EW magazine.)

Strong women do that for me.  Women who speak the Truth, even if it against what they are "supposed" to say or feel.  Women who are well read, who are independent (marital status aside).  Women who know who they want to be and go be it.

This article has introduced me to another one of these dynamic and forthright women - Dorothea Tanning. 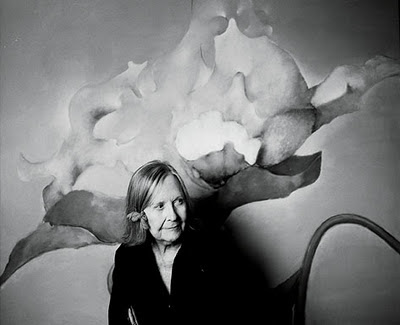 A few of my favorite quotes (be sure to read the whole interview !)
"It was a kind of a statement, wanting the utter truth, and bareness was necessary. "
"Keep your eye on your inner world and keep away from ads and idiots and movie starts, except when you need amusement"
"Art has always been the raft onto which we climb to save our sanity"
What more can you add to that?  Art has always been my Sanity.)
Posted by Krystyna81 at 9:38 AM 1 comment: 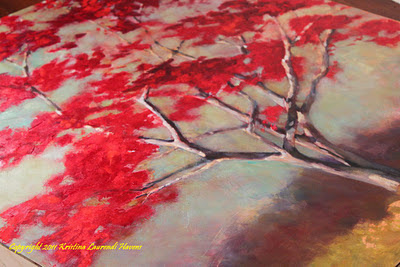 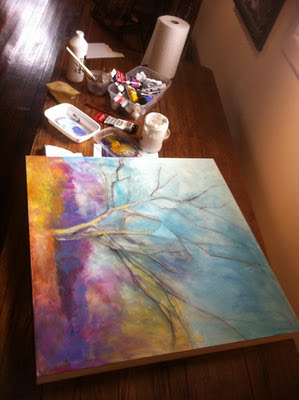 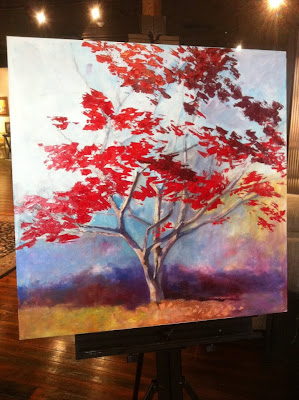 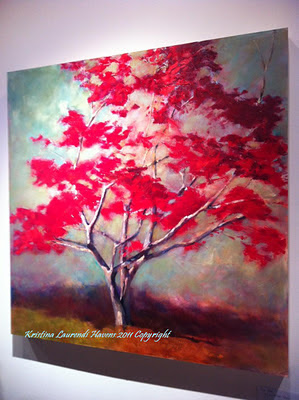 Pastel Drawings of the Female Nude

I bought a pad of the Sennelier Pastel La Carte paper, 9" x 12", and it's just the right size for quick colorful studies of the female model.  Three from our model a couple weeks ago... 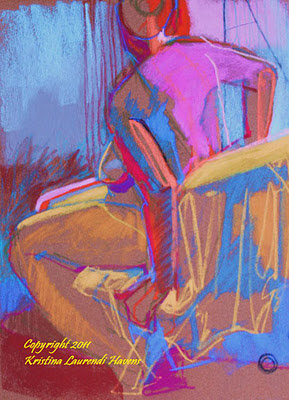 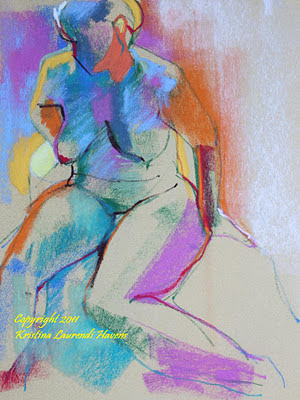 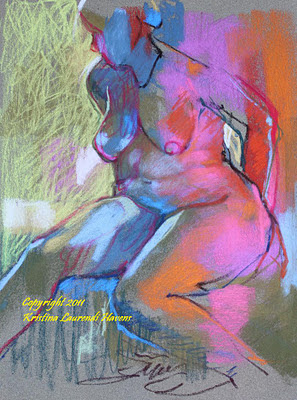 Nupastel Figure on Sennelier Paper
I abstracted the figure slightly, emphasizing the light and shadow through bold strokes of color.
And last Wednesday we had another wonderful pose that I wanted to capture quickly from both front and back. 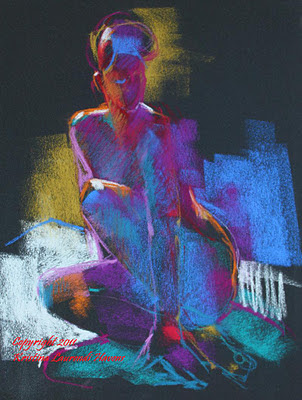 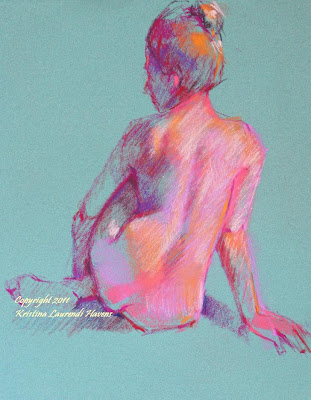 Hot Pink Nude on Mint
The paper I chose in this case dictated what direction I took the drawing - the dramatic black inspired me to grab bold neon colors that added energy and dynamism to the pose.  The soft mint compelled me to take a more feminine and delicate approach that emphasized her beautiful, subtle curves.
Posted by Krystyna81 at 11:01 AM 2 comments: 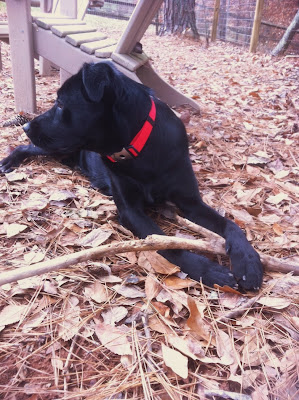 I just want to take a moment to introduce you to our newest member of the family, Catalina.  We adopted her last weekend from a shelter.  She's a black lab about a year old, and so sweet.  INCREDIBLY smart and loves to play. 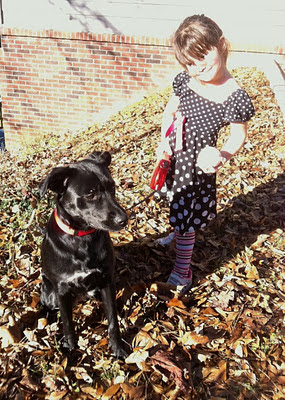 We don't know why she was at the shelter, or why her family dropped her off...but we feel very lucky to have her.  Whoever raised her - you did a wonderful job, and we will take good care of her.
We've shortened her name to "Lina"...because calling her "Cat" would have been to wierd :)
Posted by Krystyna81 at 8:11 PM No comments: