In Uniform - Newest Paintings from the Woodstock Series

Memorial Day in downtown Woodstock was absolutely wonderful.  The weather was sunny and clear, and a huge crowd gathered in the city park to honor the Veterans of the Armed Forces.  As I approached the park, I caught my first great photo of the day - a fireman bending down to hand a red hat over to a young boy.

I was pretty far away, so I kept shooting as I got closer.  I ended up combining a couple of shots to get the right pose of the fireman, the child, the firetruck, and the group of firefighters off to the right. 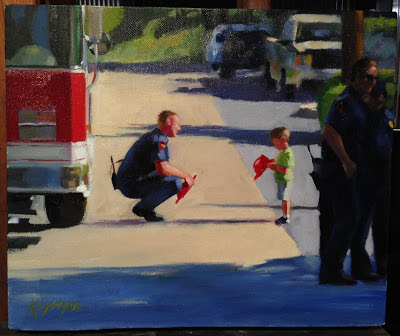 I was hoping to catch a good shot of the local fireman at some point - I often see them at Hot Dog Heaven, but this was a better shot - and showed a great side to their community spirit.

Later in the ceremony, I positioned myself at the back of the Veterans Memorial, where I could watch as several men in uniform came forward to lay a wreath at the base.  Again, I took multiple shots, and I combined a few elements - and left out some extra figures - to come up with this composition. 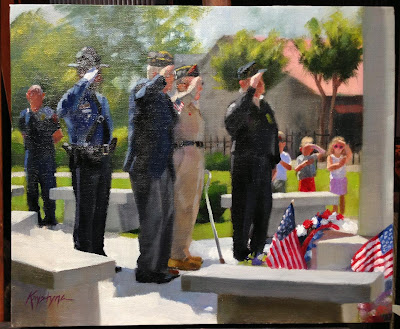 The gentleman in the middle was the eldest of the bunch, and I hesitated to add the cane, but at the advice of a friend I added it in, and that (along with the height of his waistband!) really helps to show his age.  I liked that contrast of the elder generation in the foreground and the young children in the back, doing their best salutes.

It was a proud day to be part of the Woodstock community.