What a rewarding birthday party! Collecting Dog and Cat Food instead of presents

My little boy, Jack, just turned 5 this month.  I'm still in shock that I actually have a 5 yr old...For the first time we decided to actually have a big party for Jack and his friends - up until now we had small gatherings of family and friends.  So this was a big deal.

But I was having some reservations about throwing Jack a big party.  He's been having some behavior problems at school, and even though we've been watching his diet and encouraging better behavior, we still need to see some major improvements.  Also, he just got a WHOLE bunch of new stuff for Christmas.  I was thinking...if I invite all 16 kids in his class, all of our neighbors, and his cousins...how many gifts does one 5 year old REALLY need?

But I still wanted him to have a party - to be the "king for the day" and hang out with his buddies from school.  So I made a deal with Jack - he gets to have a party, but instead of presents, everyone will be asked to bring Dog and Cat food that we can donate to the Cherokee County Humane Society.  (I had called the CCHS earlier and asked what was tops on their wish list...and before I could even finish asking, she said "food! people can't feed their pets right now!") 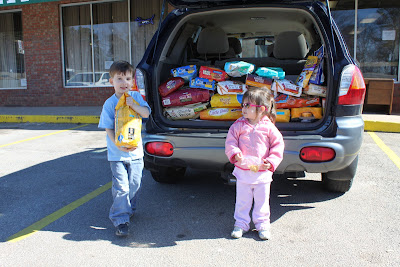 Well...I am REALLY impressed with how generous all of Jack's classmates, neighbors and cousins were! All together they donated almost 150 POUNDS of dog and cat food and treats!

Jack, Arianna and I delivered the food to the Humane Society today, and everyone on staff really made Jack feel special - lots of hi-fives and handshakes, thanking him for helping out the animals.  Jack and Ari even got to meet a couple dogs and cats! 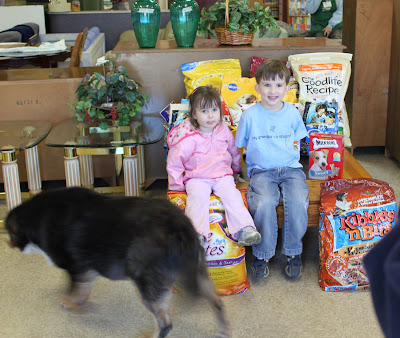 And don't worry...Jack still got lots of great gifts from us, his grandparents, and some special friends.  He had a great party, his friends had lots of fun, and I hope they all know they helped a great cause!


PS...I'd love to hear from other moms and dads...do you find this idea to be a good way to help a needy cause, or is this a little too Joan Crawford from "Mommy Dearest"...(when Christina had to donate all her birthday gifts to the orphanage!)?
Posted by Krystyna81 at 3:30 PM

Email ThisBlogThis!Share to TwitterShare to FacebookShare to Pinterest
Labels: family

I enjoyed looking at the photos. If it is good idea I think depends on the kid...and where they are at. He looks happy to have a big part to play and it probably will be one of the gifts he actually remembers later in life! Thumbs up.

My son is turning twelve in March and we're already planning his party. I think this is a brilliant idea! Parents tend to give gift cards anyways and I tend not to hold big parties just because I don't think he needs so many presents (he has three sets of grandparents and gets what he wants from us anyways). I'm going to let him decide what he wants to do... I think it will make this birthday memorable!

Bethany...Oh I agree! You want to have a big party, but really...do we need that much more stuff? Ask him if he'd like to collect sporting equipment for a needy school, or something else that HE would be proud to give. What is he interested in?

I look forward to hearing about his party :)

BRAVO, Krystina!!! What a splendid idea!! I'm sure it will be taken up and used a lot!! And a happy birthday to Jack!!