Sculpting and Painting from one Beautiful Model

I count myself as one of the lucky ones when it comes to studio space, because I get to create in probably one of the most beautiful studio spaces I've ever seen.  Wide, rich wood floors, exposed brick, high ceilings, great light...not to mention it's several miles away from the dirty dishes, laundry, and general cleaning that await me at home :) 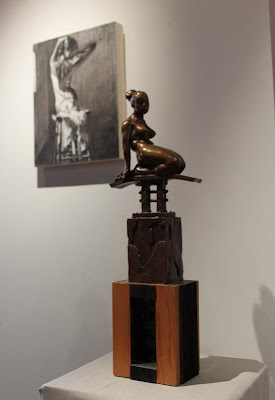 (one of Matt's smaller pieces with my drawing in the background from a previous show)
What makes the space even more wonderful are those times that I get to create alongside some very, very talented artists.  A few weeks back a local sculptor and friend, Matt Lewis, asked if we could plan some sessions with a live model so that he could build a new, large sculpture.  That sounded like a good idea to me!  So we found a lovely model and invited our fellow artists to come and work with us and the model.

And then a surprising new twist came when a friend of mine approached me with a new commission project - she wants a tall painting of a female, inspired by "grace", that would lean up against the wall in her new home. So I had just planned a series of live model sessions with a sculptor needing a standing pose AND I was about to create a large painting with a standing female nude...ah...can you say PERFECT!

The beginnings of the 6 foot tall woman... 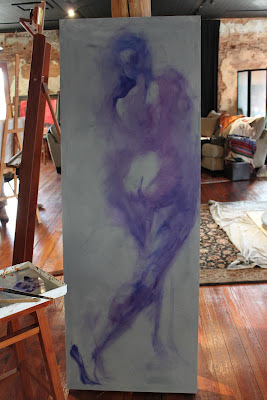 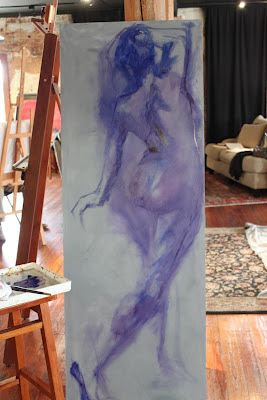 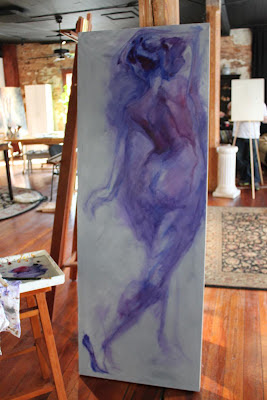 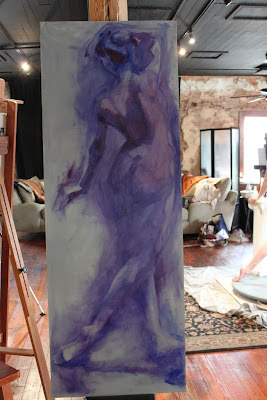 The hardest part of working on something so tall is keeping the proportions consistent from head to toe.  I like the change in her foot towards the end of the first day - the stretched out foot is a more elegant line.  I'm also thinking of extending her hand instead of having it bend at the wrist.  She'll be holding drapery as well.
And of course while I'm painting Matt was building his sculpture in clay. 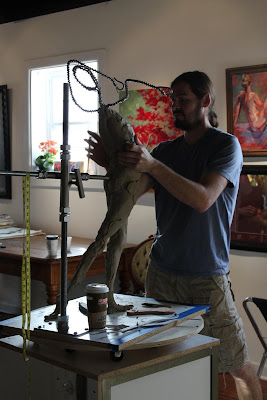 He knows the figure from inside out, building the bones and finding major landmarks on the body before adding the mass.  It's really interesting to watch him work, to see what curves and lines a sculptor finds on the form.  He is sensitive to every curve and relationship, and doesn't just dive in without a plan: he meticulously measures and documents proportion throughout the entire process.
Another artist created a small sculpture during the same session which was also really nice 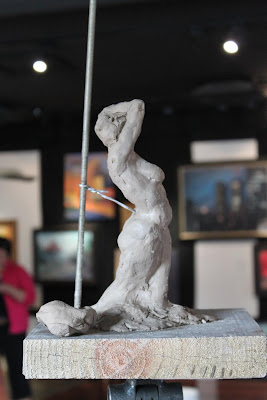 And there were several other artists drawing and painting on this lovely Friday morning as well.  We meet again soon and I will keep you updated on all of the beautiful work!
Posted by Krystyna81 at 9:13 AM

I love how your painting is coming, really beautiful!