Our last day in Italy...what a wonderful experience we had exploring this beautiful place. It seems like it was a long trip, but also over in the blink of an eye! 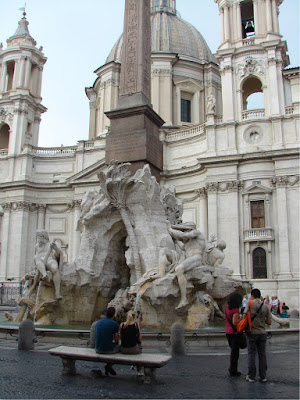 On our last full day in Rome, which was a Sunday, we had another early start to the day - our walking tour of Rome picked us up at the hotel at 7:am. This was...well, tough to say the least. We had already spent 8 days doing a LOT of walking, and this was going to be the 3rd of 4 days in a row waking before 6:30 AM. SO - a bit of advice if you are planning a long trip - be sure that you allow yourself one day to relax towards the end, to enjoy sleeping in one more time, to enjoy each other's company and not be at the mercy of a tour guide, and really finish off your vacation ON vacation - not on a schedule!
That being said...after another brief stop at Vatican square, our tour's next stop was a large square with a wonderful fountain, the Piazza Navona. And by the way - the pattern was holding true - our tour guide had already left one couple behind! 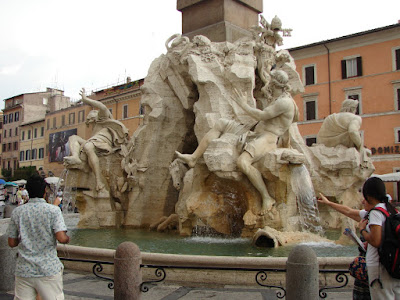 And while I was taking pictures of the fountain, the tour guide was already walking away! David had to rush over and grab me, saying "c'mon! we're leaving!" and we had JUST got there!

So anyway...a bit more walking and we arrived at the Pantheon. I was really looking forward to seeing the inside - the size and the shape of the dome are almost impossible to capture in a photograph. But, in keeping in tune with our luck of the day, the Pantheon was not open to visitors because of a Sunday service. Hmm. Not happy about that! 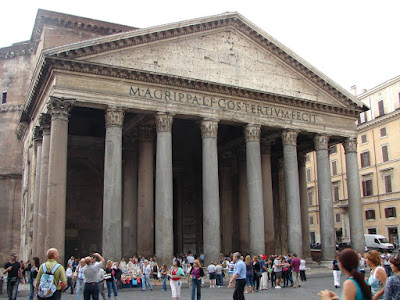 But it was quite impressive, and the scale of the outside is quite large. (Of course I'm adding this to list of reasons I need to return to Italy...) 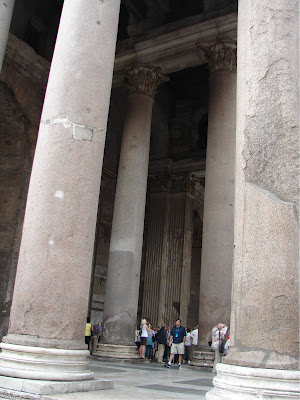 So our tour guide, not counting heads or warning us of his plans, was walking away again. Did I mention - he was a little old man in a a suit with an umbrella for a cane, who talked with his eyes closed, as if in some trance. When I realized he was leaving many of us behind, I said to David "Do you think he knows that he's leaving part of the tour behind?" To which my dear hubby replied "I don't think he knows he's ON a tour!" At least he made me chuckle :) 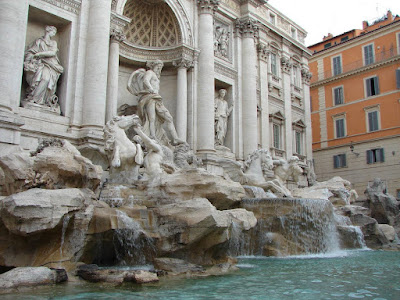 At least the old guy knew where he was going! Our next stop was the Trevi Fountain. Unfortunately (or, in keeping with the luck of the day) it had started to drizzle by this point, and umbrellas were brought out and walking was not as pleasant. I would have loved to sit a draw a while at the fountain - which is HUGE and kind of tucked in-between a bunch of buildings - but with the rain and the tour pushing us onward, I didn't get a chance. However - I did throw 3 coins in the fountain, assuring that 1) I would return to Rome and 2) That I was going to spend the rest of the day humming "Three Coins In The Fountain". 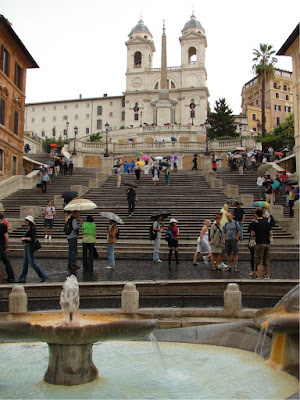 Next stop was the Spanish Steps, and as you can see many umbrellas were appearing, the rain was becoming annoying, and our tour guide decided he needed a nap so he stopped the tour about an hour early! David and I decided this was a good time to break for lunch and wait for the rain to pass. (By the way...unless you have a really hard time navigating, I don't suggest a walking tour of Rome - it is all very easy to find - you can do it!)
This was one of my favorite meals, at the Caffe' Leonardo, which was only about a block from the Spanish Steps. I had a delicious panini with turkey and avocado, then treated myself to a yummy desert and a cup of cappuccino. Much to my husband's embarrassment, the camera came out and I took a picture of my pretty food! I kept one of those delightful little heart-shaped sugar pouches :) Our day was looking up! And the sun returned, so we continued exploring on our own. 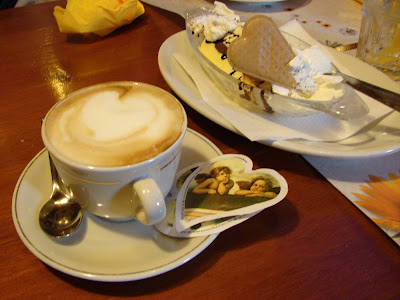 As we approached the Colosseum, we passed many archaeological sites. I took a bunch of pictures, but it turns out - if you've seen one pile of pillars, you've seen them all! So here is a token photo of some ruins. 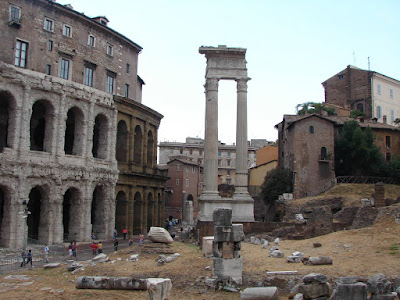 Our first glance of the Colosseum as we walked the Via dei Fori Imperiali. 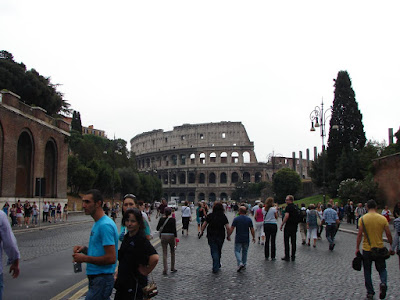 A bit of street-side entertainment on our walk. I thought it was cool that I captured this dancer mid-air. 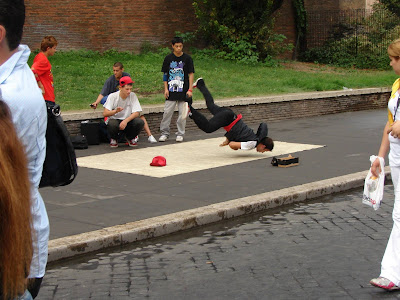 A few shots up-close. We did not go inside, there were very long lines, and our early wake-up call was catching up to us, but we did see quite a bit just by exploring from the outside. 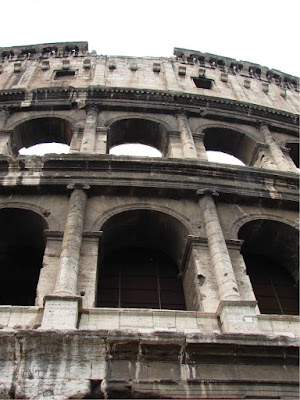 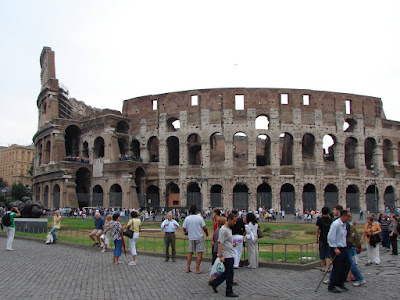 We actually have a post-card of the Colosseum on our fridge, and the first time my son saw it he said "oh my gosh! A monster ate that building!" When I tried to explain what really happened, he shot down my story and his 4 yr old brain came up with a whole saga of a monster attacking the building from outer space. It was a good theory! 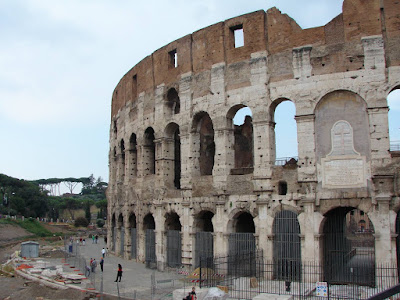 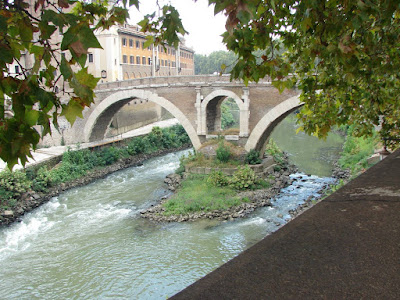 Let me tell you - Cab drivers are CRAZY! This guy never went less than 50 MPH, even if he could only go 2 blocks between stoplights! At one point, he cut THRU St. Peter's square, still driving like a maniac, practically plowing into a NUN! Can you imagine?!?! I bet that it's a one-way ticket to the basement if you run over a Nun IN St. Peter's square!
So...made it back to the hotel, and a quick power-nap later, I was determined to do at least one more drawing on our last day in Italy. So I ventured out alone, leaving David to siesta, and found this fountain only a few blocks from our hotel. The light was great, creating a lot of drama on the beautiful female figures. 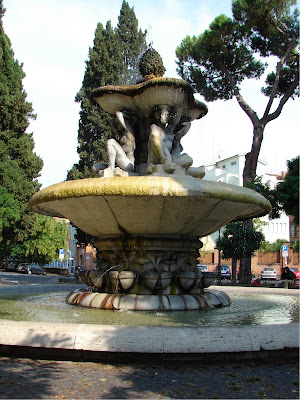 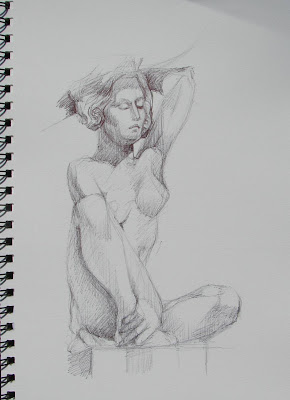 And then I started sketching from another POV, but the clouds rolled back in and I lost my light. Perhaps, one day, I shall finish this drawing, too! 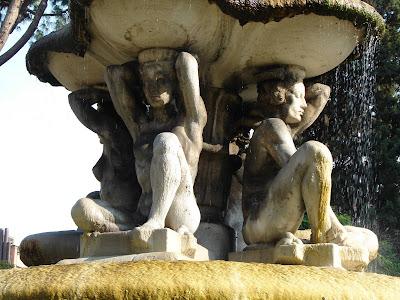 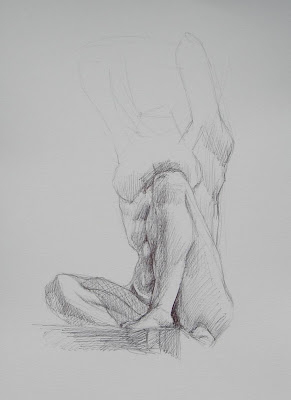 Ah. Deep breath. So that is about it for my Italy re-cap! The next morning we were on a (early!) departure from Rome back to Atlanta. Thank you again for letting me share my trip with you :)
Posted by Krystyna81 at 3:50 PM

Oh Krysty... I am drooling over your photos! We want to go to Italy SO BAD!!! How long were you there? What month did you go? Was this your first time? How is the Angel coming along? I posted my desert painting on the Yupo paper, if you want to check it out....That photo you took of the channel in between the trees was such a beautiful composition!

Hi Donna B! We went to Italy the first two weeks of September. We had gorgeous weather the whole time, except for a little rain the last day in Rome. Florence was my favorite...very easy to walk everywhere and SO much art to see - indoors and out. If we go back (fingers crossed!) I'd love to explore a bit more in Rome and Florence, but have also heard that there are some gorgeous costal cities to visit as well. I hope you get to go soon! And yes - I will check out your painting :)