Some  moments that have stuck with me from this year...

5.  Joining a Zumba class!  This has been the BEST thing I have done for me, my health and well-being, and my sanity!  The excersize, returning to my "dance" roots while getting in (some kind of) shape, and getting a chance to meet some really great women!  The best part of it , beyond FEELING better, is that I WANT to go...which makes it a lot easier to go :) 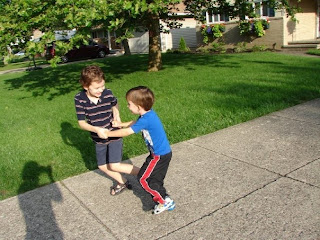 4.  Watching my nephew, Austin (on the left), play with my son, Jack.  Austin is autistic, and doesn't always "engage" others in active play.  When we visited back home in Western New York over the summer, we were walking near my parents house - me, my two kids, my sister, and her two kids.  At one point, Austin reached for Jack's hands, and started singing "ring around the rosie" while spinning Jack around! This was incredible! Jack had been following Austin around for several days, tryin SO hard to get Austin to play with him, not understanding Austin's Autism.  You should have seen Jack's HUGE smile when Austin finally played with him!

3.  My two children going to school together for the first time! It was summer school, but it still counts! A couple hours to myself...Jack walking Ari to her class like a protective big brother...it was so cute! 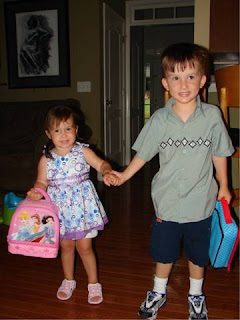 2.  Finally making the connection with Jack's behavior and his sensitivity to food coloring.  I can't begin to tell you how much this has changed our day-to-day lives.  Jack is SO much calmer now, and no longer has a melt-down at the smallest problem.  His behavior at school is showing vast improvement, and he is following directions and rules much better. Sure, he's still an almost-5-year-old, and has his moments, but I used to be tense all day, not knowing Jack was going to have his next melt-down! If I could shout this info from the roof-top, I would.  I want nothing more than to help as many people as possible make this connection a LOT earlier than we did!

1.  Celebrating 10 years of marriage! I'm sure that someday, this will seem like a small feat...I want to reach 50 years together! But here, and now, I am really proud to be Mrs. D. H., and I am really proud of us, and truly Blessed to have such a wonderful husband.

Email ThisBlogThis!Share to TwitterShare to FacebookShare to Pinterest
Labels: 2009