A glorious day of painting with two models

A few weeks ago our Wednesday evening figure drawing group had the privilege of working with two wonderful figure models together.  Truly professional and incredibly talented - they both have incredible "stage presence" and transform poses into mini-stories, in  a way.

A small group of us to wanted some extra time to work on one long pose booked the same models today and had almost 4 hours to paint one fabulous pose.

I started on a primed and tinted canvas, 24" x 30", blocking in both figures.  I wanted to be sure that I was leaving enough room at both ends of the pose, so that her elbow was going to be in the frame and his foot would not be cut off on the other end. 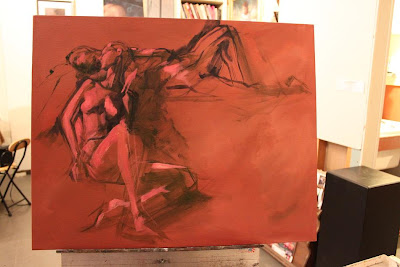 Working with a 1" brush I blocked in some of the larger shadow shapes. 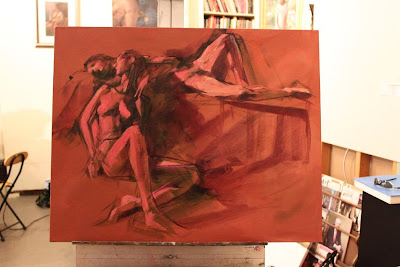 As I started to work into the smaller areas of detail, I had to move a few elements - the length of his leg was too long, and his head was too high, so I had to re-draw both areas. 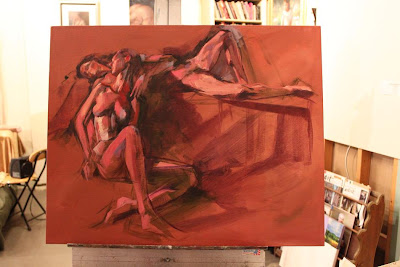 I continued to add local color, trying not to get too bright too fast.  I still feel that his leg may be in the wrong spot, or that his torso is just too long.  But I like the composition, and the space between the male and female figure.  There is an important element, his hand caressing his thigh, that I really need to paint in - it shows more of a connection between the two figures. 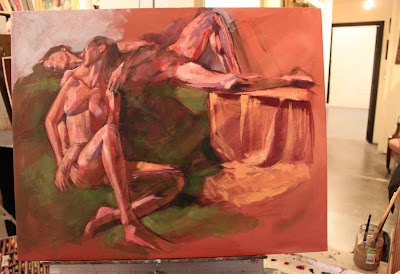 It was so nice to work for such a long time from one pose, to really have a chance to look, and re-look, and think about where elements need to be.  Now, when I finish this in the studio from reference photos, I'll be able to draw from both the photograph and the actual experience.
Posted by Krystyna81 at 8:42 PM

Thank you, Mizuko! I sometimes worry that I have to many styles, but then, when I look at work as a whole body of work, I see similarities thruout. DOn't be affraid to keep exploring new things!