Constance Payne. Or as I referred to her in my mind - Constant Pain. She was a professor of painting/drawing during undergrad school. Half the time I couldn't tell if she was my biggest supporter or my worst enemy. But at the end of the day, when it came to improving our drawings, she was always right. I hated that.

Connie taught my 3rd semester of figure drawing. By this time I felt like I was doing a pretty good job of drawing naked people. By the second class, Connie shouted that "you are allterrible!! There's no volume in your drawings! You're drawing cartoons!" and dismissed the model. She then announced that we will not go back to drawing the figure until we master something much more difficult. The egg carton.
WHAT??? An egg carton? But I've been drawing the figure for TWO WHOLE SEMESTERS! That's awful! So for two whole weeks all we drew were the insides and outsides of egg cartons. 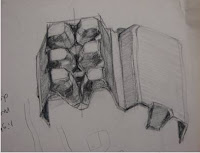 When we went back to drawing the figure, I began to notice that I looked at a knee a whole new way - it wasn't just a bend in a leg, it was the same shape as that bottom of the little cup that holds an egg. So is a shoulder. And so is the tip of the nose. The parts of the human body aren't flat, but multi-dimensional. There are numerous plannar changes that create the volume of the figure. 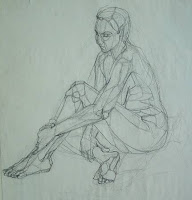 And The drawings DID improve. I was no longer creating outlines of a human form, but the volume of the form. My figures were no longer paper dolls, but sculptural and dense. Eventually they became less geometric and more organic, but the principals of planar changes still held true.

Hi Tina! Wow you are so talented! I will take one of everything

A fellow figure drawing artist! (Not the my etsy shop sells work in that area) I love your posts, I plan to read them all! Adding you to my blogroll.

That exercise makes me think that I probably could have learned from it, too! I remember teaching myself to draw hands, finally breaking it down into big, angular chunks. I never really had anyone make me draw anything useful like that, just lots of spheres and boxes and whatnot. I'll have to remember the egg cartons should I ever teach again.