I can only handle Mistakes on Canvas

I am one of those people who fears making a mistake.  Not that mistakes are a bad thing, they are part of everyday life.  I guess it's more about a fear of being WRONG.  I really hate being wrong.

Cooking, for example, is one of those things that brings out the worst feelings of fear and inadequacy.  For example I made a half a turkey breast the other day, and I called my mother and had a 20 minute conversation about whether or not I should add onion and carrot to the pot or cook them separately.  Then, as if that battle of willpower wasn't enough, I decided to make soup from the leftover turkey carcass the next day.

Have you ever looked up how to make soup from a turkey carcass?  Be prepared to set aside 48 hours to boil, steam, peel, strain, re-boil, and cook.  I just want to cook a turkey into some soup darn it!!  But when you are WRONG in the way you prepare a dish, you can't just say "I meant to do that!" because everyone can taste your mistake.

Perhaps that is why I am most at home in front of a canvas.  I can turn almost any moment into "I meant to do that".  Of course I wasn't always this way.  I feared doing it "wrong" when I was in college - at first.  Luckily I had some amazing professors who pushed and prodded and even cut me down a peg or two and just said "TRY!"

I have seen that fear of mistakes in students in the past.  That fear of putting a single mark on the paper, the first stroke of color on a canvas.  I would say often, and loudly, "I can't fix what's not there! If you want me to help you I have to see what you're doing!"  Students who would wait for 30 minutes for me to come around to their easel, petrified that they would DO IT WRONG.

What would happen if that fear of doing it wrong took precedence over the thrill of getting it right?  Had I never tried making turkey soup I wouldn't have this big bowl of yumminess with turkey and rice and fresh carrots and zucchini and oh my goodness it came out SO GOOD.  And I didn't follow any one's recipe or directions - I knew what I wanted to make and I tried.

I had a wonderful studio partner during graduate school who worked in encaustic, a media I had never tried before.  Her work was inspired by her family's land in south Texas.  The cracks when the land was dry, the various colors in the earth, the tracks the animals made thru the brush.  Her work consisted of layers and layers of color that she would scratch into, each scratch revealing the colors down below.

She would often tell me - it's not just about the final layer, it's about all of the layers underneath.

When you are creating, don't fear mistakes.  Embrace them.  Let them become part of the history on the surface, the process of discovery as you create.  Take ownership of your successes and failures - be willing to TRY - be willing to fix it.

One of my favorite figurative pieces, that was three different (bad!) paintings before this layer finally resolved all of my mistakes... 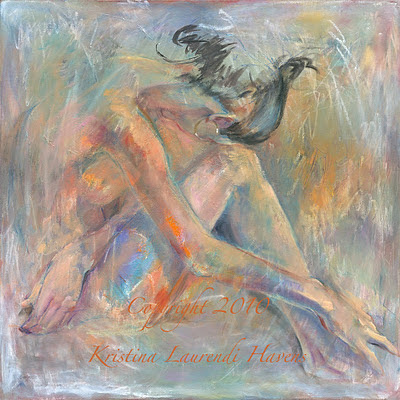 Good post. I know I'm afraid to make mistakes. I have to battle this paralyzing fear that holds up my progress as a professional, an artist, and a person.

I find your art very inspiring.