Sometimes I come across a photograph that would barely needs any adjustments if I were to translate it into a painting.  This was one of those photographs.

Heather captured a young woman, in the most glorious yellow and red outfit, posed in a doorway.  She was tentatively looking into the darkness behind her.  The sunlight seemed to want to drag her outside, yet she was being pulled back into the dark space inside.  A woman of an older generation appears in the background, slightly out of focus, entering a back doorway, perhaps catching the young woman off guard.

I painted with oil on a 12" x 24" birch panel that I primed with a clear gesso, allowing the grain of the wood to show thru. 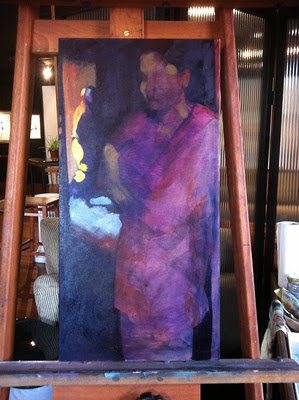 I started with a pretty dark palette of prussian blue and alizarin crimson, blocking in the largest shapes.  Then I added the bright light coming thru the back door in a shade of light turquoise and grey. 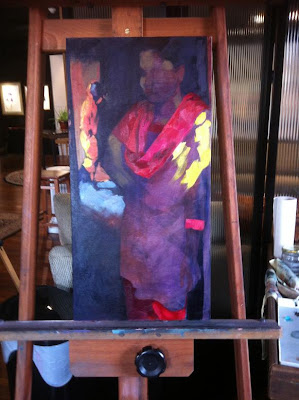 I was pretty excited about the fabric in this piece, especially the red satin.  A rich red requires several layers of paint and glaze to develop a truly saturated red.  I actually started the red area in more of a fuschia tone, which would then be covered by a warmer red alizarin glaze for the perfect final color. 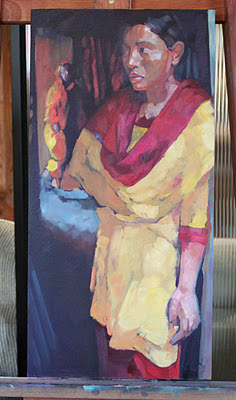 I continued to block in the shapes of the yellow fabric and her skin tone.  These two colors needed to work well together.  I didn't want her skin to appear washed out, which is difficult next to such a saturated color.  However, if I went too far with the color of her skin, maybe too orange or red, it would appear more like make-up than skin color. 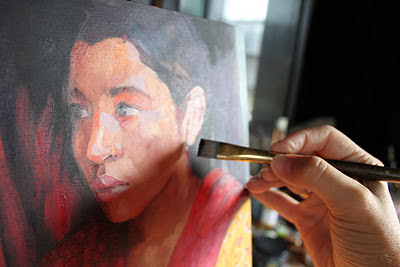 Adjustments are made at every step.  Colors are fixed.  Edges are shifted. 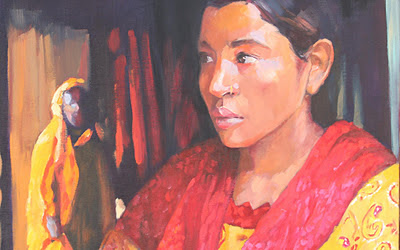 The look in her eyes was so important.  You make look at her once and see fear, but look again and see defiance. 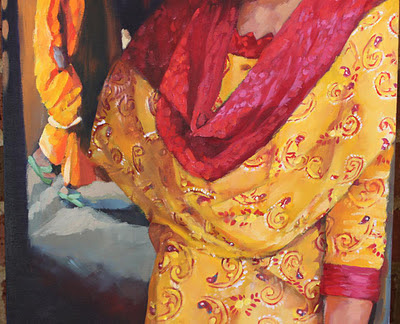 The fabric folds and patterns took the most time.  I don't mind telling you I took several breaks to check Facebook when my eyes started to glaze over... 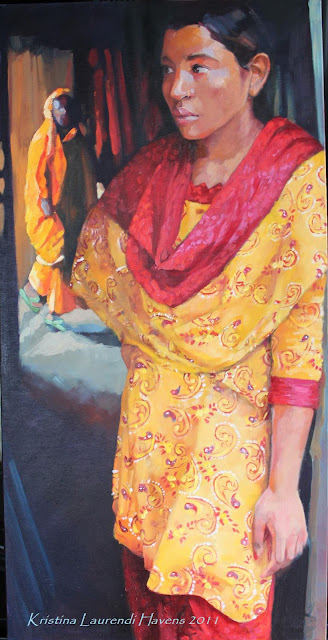 This painting will be part of an on-line auction starting on October 10th to benefit Team Every Mother Counts, participating in the New York City Marathon on November 6th.
Click here to bid!
Posted by Krystyna81 at 7:22 AM

Amazing, amazing, absolutely. You do reds really, really well. and the story is just as wonderful.

WOW, the fabric on this one is stunning. You went above and beyond :)