As Heather Armstrong shared her remarkable experiences in Bangladesh, she spoke about a time when she was sitting among a group of men and women, learning more about the concerns for the pregnant women of the village.


"Two men in the group had lost their wives to childbirth. Another man had lost his son.  When we asked what had inspired them to organize this group one man spoke up and our translator said, "Two years ago they
learned that women did not have to die when giving birth. Before then, they did not know there were options."


What would have my husband done had I died during childbirth? Or our son? Or daughter? 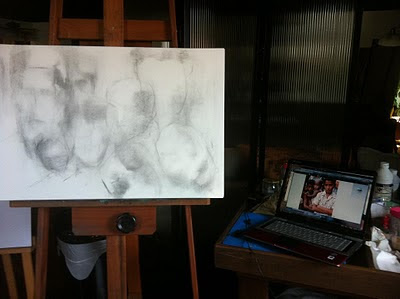 So I wanted to create at least one painting focused on the men, of all ages, who could be effected by the loss of a mother.  There were stunning photos of babies, teens, and elders, and I brought them all together in a layered mixed media piece. 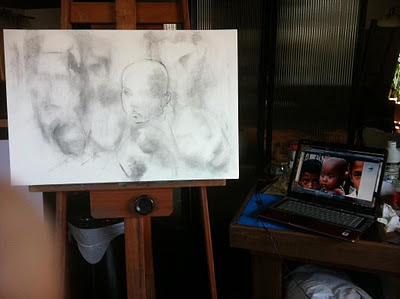 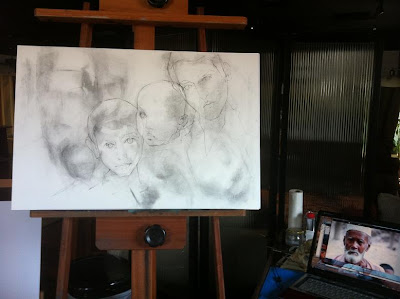 This is charcoal on watercolor board.  I blocked in the shapes with vine charcoal then started defining the features with charcoal pencil.   I chose to put two of the faces upside down, as a way to activate all the space and create an interesting flow among the faces.  It's also a little off balance...is that what I felt when I thought what the men go thru when a woman dies in childbirth? A loss of balance? 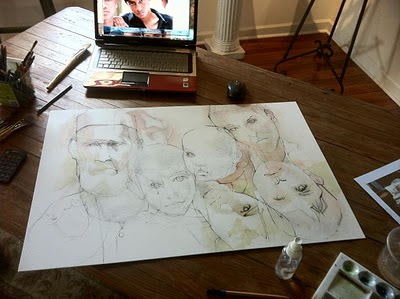 I slowly added some color with washes of watercolor. 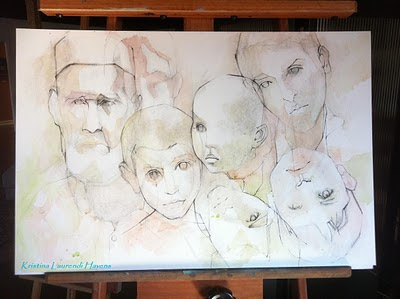 I liked it at this stage, but it felt unfinished. 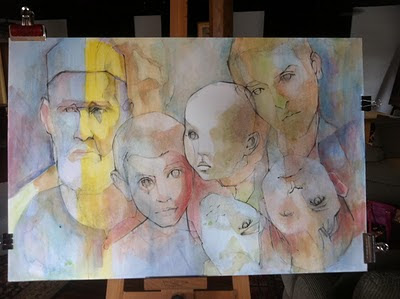 Then the color got a little too intense!  So I had to tone it down a little.  I added a thin later of modeling paste, then re-defined some lines with charcoal pencil, and added another layer of glaze to unify the colors. 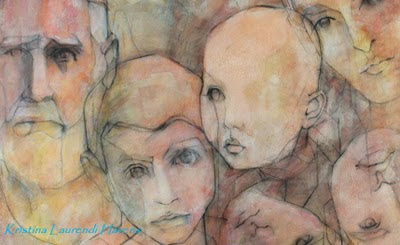 The eyes on every face were so expressive and had totally different characteristics.  I kept trying to add the second eye to the sweet child in the middle, but every time I did, it made the face seem older, and too engaging.   There was something that worked about the simple negative shape in the middle of the circle of men. 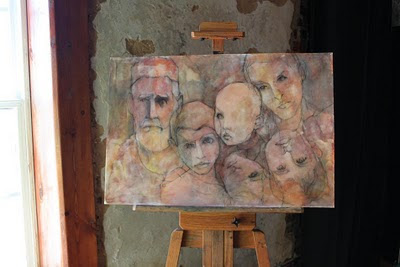 I was a little worried that this piece might feel too "quiet" among the colorful oil paintings of the women, but during an open studio event, when the paintings were on display, several people walked right across the room, as if drawn in my their faces.  It has an incredible presence.
This painting will be part of an on-line auction starting October 10th to benefit Team Every Mother Counts participating in the New York City Marathon on November 6th.
Click here to bid!
Posted by Krystyna81 at 7:28 AM